This post was planned for the last day of 2015 but somehow I forgot to do that probably due to not blogging for the past few months. So a change on plan, I made it as my first post for the year 2016. Let's hope this year will be my year of blogging just like 10 years ago. 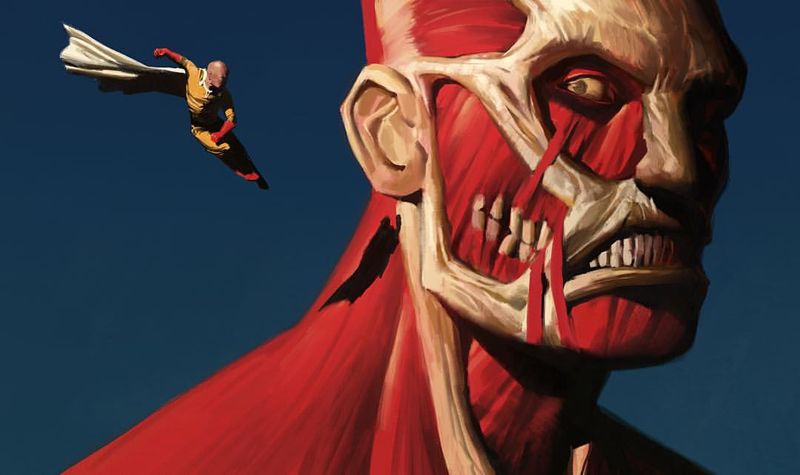 By the time of writing Autumn 2015 Anime just has just come to a close. It was fun with GochiUsa season 2, Miss Monochrome Season 2, Hackadoll and most unexpectedly, One Punch Man (and some lesser interest went to Gakusen Toshi Asterisk and Rakudai Kishi no Cavalry). One Punch Man is like the best anime in Autumn 2015 season and I just caught up to its manga (the redrawn version). To sum it up this anime parodies many heroes and villains stereotypes in history, whether they're from Japan or US comics. At first I was reluctant when I read the boring synopsis and the boring-looking main protagonist but immediately after watching the first few minutes of the pilot episode, I already hooked up to it and would stay up late till early morning to wait for the release every week.
However I'm worry that One Punch Man (which just happened to be my new favorite) will become yet another One Piece or Naruto or Bleach. Not literally but in a sense that it became overrated by the overwhelming fans to the point it'd stop being special. It's like when everybody around you and their moms and grandmas start using iPhone and Mercedez and BMW just like you that you no longer feeling special of having one. The same happened to Shingeki no Kyojin which also used to be my big favorite but have since having the feeling subdued due to the overwhelming fans.
Putting my worry aside, when I said parodies, the anime have many 'references' to older series like Dragonball. Saitama, our bad hero deals with all enemies with just one punch, hence the "One Punch Man" title. It may sound boring if I put it that way but the creator did creatively piece things together into an interesting work. It was funny, it was intense and to an extent, 'melancholic'.
The problem with OPM however is with the crowds where they are either extremely retarded or too dumb to realize/recognize Saitama and his power, and often unfairly credited his achievement to people who did not do much or didn't deserve it at all. Some even make excuses for other defeated heroes by saying the monsters are already weakened by other heroes before Saitama finished them. Even if the monster are really had been weakened (which is not true) they should have at least been able to see how strong Saitama is. He was even accused of cheating, not just cheating by showing up 'last' but also cheating to rise in ranks. Well that's bullshit. If he was really cheating then he would have made it look like he was having a hard time. Instead he didn't waste any effort but gave it his all to defeat the monsters, resulting in easy win.
Good thing Saitama didn't take all those bullshit personally and managed to stay motivated. He also didn't go around making trouble "to look for a strong opponent to kill his boredom". He just wait for the enemies/monsters to come out and give them his one-punch-kill to solve the problem. One question remains however, before he joined the Heroes Association, I wonder how did he make money because he didn't seem to be having any job (in fact he was jobless before he became volunteering as a hero) and I don't think anybody is donating to him either considering he's hated by many people who don't understand him.